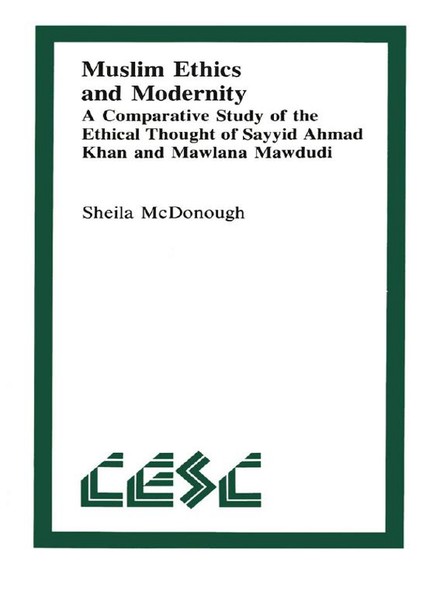 Muslim Ethics and Modernity : A Comparative Study of the Ethical Thought of Sayyid Ahmad Khan and Mawlana Mawdudi

A study of modern Muslim ethics, focussed upon the lives and writings of Sayyid Ahmad Khan and Mawlana Mawdudi, this monograph  sheds light upon the modern ethical problems of contemporary Islam. Sayyid Ahmad Khan, often called a liberal, a modernist, or an acculturationist, represents the "liberal" trend of Sunni Muslim ethics. Khan's approach borrows much from reason, yet for Khanreason and revelation are not in conflict. Reason guides the interpretation of Islam when revelation is insufficient. In contrast, Mawlana Mawdudi's fundamentalism is, at least in part, anti-rational; it depends upon revelation (as it comes to one man in particular) and is very autocratic. McDonough is concerned with Khan and Mawdudi, both writers within the Indo-Pakistan Muslim tradition. Their conflicting views, their differing interpretations of ethics that suit Islam in the contemporary world, exemplify the difficulties and turmoil faced by Muslims the world over. For these men, modernity has not spelled the end of Islam; yet each has found a different way of relating Islam to the present and the future in faithfulness to traditional Islam.
This monograph will be of interest to students of contemporary Islam, as well as to those interested in questions of comparative ethics, for the liberal/fundamentalist conflicts outlined in this monograph are analogous to manifestations of the same dichotomy in all world religions.