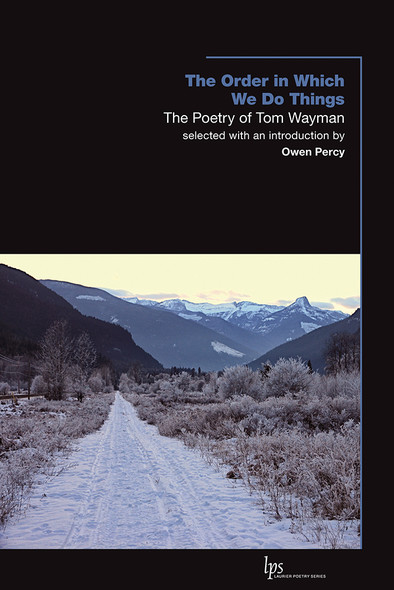 The Order in Which We Do Things : The Poetry of Tom Wayman

Tom Wayman’s poetry has been published around the world to great acclaim. Wayman is one of Canada’s most prolific and public poets, and his writing since the 1960s has been by turns angry, engaged, hopeful, tender, and hilarious. His voice and persona are his alone but simultaneously ours too. His recurring themes—work, mortality, love, lust, friendship, the natural world—make his work a poetry of human inevitabilities, a poetry that exults in the inevitability of seeing poetry in the everyday.

Wayman’s craft is poïesis (from the Ancient Greek “to make”)—making a change, making a difference, making a ruckus, making the most of our time. His working life has always been inextricable from his writing one; his poems offer an honest and candid consideration of the ideological underpinnings, practical realities, and subtle beauties of a life lived on job sites and picket lines, in union halls, classrooms, and book-stuffed offices, and on the page itself.

The Order in Which We Do Things is a collection of more than thirty of Wayman’s best poems, selected and introduced by Owen Percy. Percy’s introduction explores the genesis of Wayman’s print persona and contextualizes his politically engaged, conversational voice within the pantheon of its various publics. In his afterword, “Work and Silence,” Wayman reflects on his more than forty years in print as a work poet, and underlines poetry’s sustained power to engage readers, invite solidarity, and stoke the fires of critical resistance to the order in which we do things.