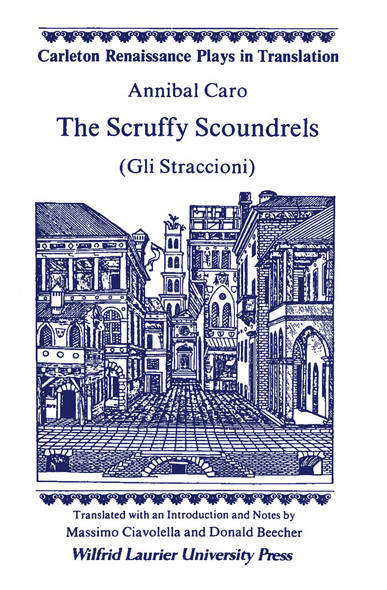 The Scruffy Scoundrels by Annibal Caro offers the student, scholar, and general reader a sixteenth-century masterpiece in modern English translation.
From one vantage point, The Scruffy Scoundrels would appear to be no more than a series of unrelated scenes and sketches grouped around a highly conventionalized and loosely structured love plot: the arrival of Pilucca and Tindaro in Rome abounding in topical references; the appearance of the two ragged brothers so arbitrarily related to the rest of the events of the play; the love squabble between two servants that leads to Nuta’s memorably comic invective; the stock farcical routines of the Mirandola episodes; the long pathetic tale of Tindaro so little of which actually takes place on the stage. There is a sense, however, in which each scene contains its own ethos and milieu and hails from a particular comic genre, each with its own topoi and character types. This efficient management of plot is simply a measure of Caro’s comic genius.