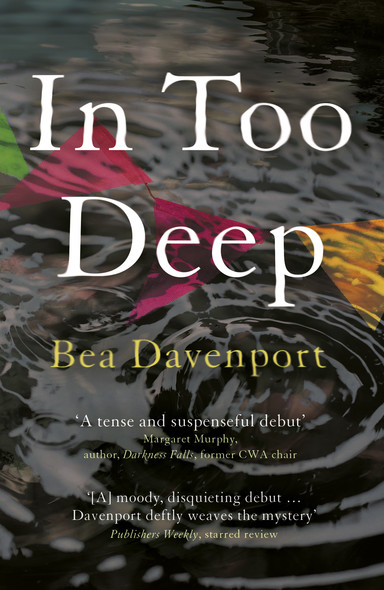 In Too Deep: All-consuming crime thriller you won't be able to put down

“The window’s so small I can’t see what happens next. But what I do know is that Kim is dead. And I know this, too – that I helped to kill her. Kim, my lovely, only, best friend.” Five years ago Maura fled life in Dowerby and took on a new identity, desperately trying to piece her life back together and escape the dark clouds that plagued her past. But then a reporter tracks her down, and persuades her to tell her story, putting her own life in danger once again.
It’s the story of a friendship between two women in a small, Northern town where nothing much happens… but there is something sinister lurking beneath the surface. Dowerby’s hidden secrets of violence and deceit must be revealed… but at what consequence?Bea Davenport brings us a believable yet gripping suspense thriller perfect for fans of Angela Marsons, Mark Edwards and B A Paris.

'Davenport deftly weaves the mystery surrounding Kim’s death and Maura’s evolution from victim of her fears to fully functional adult into a seamless whole.' Publisher's Weekly

'In Too Deep is a thrilling crime novel, so suspenseful that...it'll have you poring over its contents until 3am...' Laura Steven, Living North Magazine