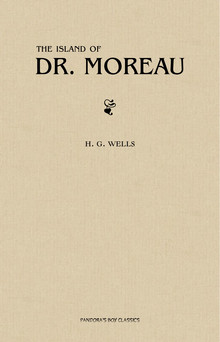 The Island of Doctor Moreau

H. G. Wells’s science fiction classic: the dark and captivating story of one man’s fight for survival against the lab-made nightmares of a mad scientist Shipwrecked and abandoned, Edward Prendick cautiously steps ashore a remote island in the Pacific. Though wary, Prendick is unaware of the horrors that await him here. But what appears at first to be a typical volcanic island slowly reveals itself to be the macabre workshop of maligned London physiologist Dr. Moreau. Moreau’s genius had been celebrated far and wide until the true nature of his work was exposed. Now secluded on his island, Moreau engages unimpeded in gruesome experiments of vivisection, splicing animal and man together in a terrifying display of his dominion over nature. When Prendick realizes he’s slated to be the next subject on Moreau’s grisly surgical table, he flees to the jungle—where all manner of unnatural creatures abound...