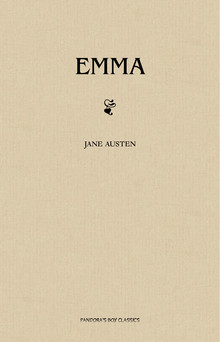 When her former governess finds happiness as the bride of a local widower, the brilliant and beautiful Emma Woodhouse — one of Jane Austen’s immortal creations — flatters herself that she alone has secured the marriage and that she possesses a special talent for bringing lovers together. The young heiress next busies herself with finding a suitable husband for her friend and protégé, Harriet Smith, setting off an entertaining sequence of comic mishaps and misunderstanding in this sparkling comedy of English-village romance. Beneath its considerable wit, the novel is also the story of a young woman’s progress toward self-understanding. “Emma” abounds in the droll character sketches at which Jane Austen excelled. In addition to the well-intentional heroine and her hypochondriacal father, the village of Highbury during the Regency period is populated by an amusing circle of friends and family — kindhearted but tedious Miss Bates, a chatterbox spinster; ambitious Mr. Elton, a social-climbing parson; Frank Churchill, an enigmatic Romeo; Mr. Knightley, Emma’s brother-in-law and the voice of her better nature; and a cluster of other finely drawn, unforgettable personalities. The author’s skill at depicting the follies of human nature in a manner both realistic and affectionate elevates this tale of provincial matchmaking to the heights of scintillating satire. Of all great writers, Jane Austen is the most difficult to catch in the act of greatness. —Virginia Woolf Jane Austen’s masterpiece. —Rex Stout Jane Austen is my favourite author! I read and reread, the mouth open and the mind closed. —E. M. Forster How could these novels ever seem remote... the gaiety is unextinguished today, the irony has kept its bite, the reasoning is still sweet, the sparkle undiminished, as comedies they are irresistibly and as nearly flawless as any fiction could be. —Eudora Welty It is the cleverest of books. I especially love the dialogue — every speech reveals the characters’ obsessions and preoccupations, yet it remains perfectly natural... absolutely gripping. —Susannah Clarke