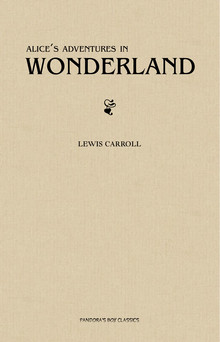 One of the most popular and most quoted books in English, “Alice’s Adventures in Wonderland” was the creation of Charles Lutwidge Dodgson (1832–1898), a distinguished scholar, mathematician, and author who wrote under the pseudonym Lewis Carroll. Written for young readers but enjoyed equally by adults, the wonderfully fantastic tale is credited with revolutionizing children’s literature and liberating it from didactic constraints. The story is deeply but gently satiric, enlivened with an imaginative plot and brilliant use of nonsense, as it relates Alice’s adventures in a bizarre, topsy-turvy land underground. There she encounters a cast of strange characters and fanciful beasts, including the White Rabbit, March Hare, Mad Hatter, the sleepy Dormouse and grinning Cheshire Cat, the Mock Turtle, the dreadful Queen of Hearts, and a host of other unusual creatures. Only Lewis Carroll has shown us the world upside down the way a child sees it, and has made us laugh as children laugh. —Virginia Woolf The clue to the enduring fascination and greatness of the Alice books lies in language... It is play, and word-play, and its endless intriguing puzzles continue to reveal themselves long after we have ceased to be children. —A. S. Byatt “Alice’s Adventures in Wonderland” is a book of that extremely rare kind which will belong to all the generations to come until the language becomes obsolete. —Sir Walter Besant