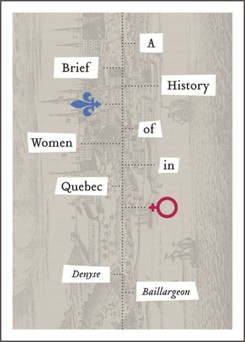 A Brief History of Women in Quebec

A Brief History of Women in Quebec examines the historical experience of women of different social classes and origins (geographic, ethnic, and racial) from the period of contact between Europeans and Aboriginals to the twenty-first century to give a nuanced and complex account of the main transformations in their lives.Themes explored include demography, such as marriage, fecundity, and immigration; women’s work outside and inside the home, including motherhood; education, from elementary school to post-secondary and access to the professions; the impact of religion and government policies; and social and political activism, including feminism and struggles to attain equality with men. Early chapters deal with New France and the first part of the nineteenth century, and the remaining are devoted to the period since 1880, an era in which women’s lives changed rapidly and dramatically.The book concludes that transformation in the means of production, women’s social and political activism (including feminism), and Quebec nationalism are three main keys to understanding the history of Quebec women. Together, the three show that women’s history, far from being an adjunct to “general history,” is essential to a full understanding of the past. Originally published in French with the title Brève histoire des femmes au Québec.