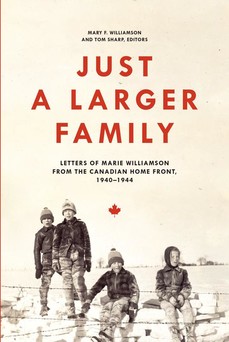 Just a Larger Family : Letters of Marie Williamson from the Canadian Home Front,1940–1944

The Second World War had been under way for a year when Marie and John Williamson welcomed two English brothers to join them and their two children in their small house in north Toronto for the duration of the conflict. Marie wrote over 150 letters to the boys’ mother, Margaret Sharp, imagining that she could make Margaret feel she was still with her children. She shepherded the boys through education decisions and illnesses, eased them into a strange new life, and rejoiced when they embraced unfamiliar winter sports. The letters brim with detail about family holidays, the financial implications of an extended family, their involvement in their church, and the games and activities that kept them occupied. Marie’s letters reflect the lives and concerns of a particular family in Toronto, but they also reveal a portrait of what was then Canada’s second-largest city during wartime. The introduction is by Mary F. Williamson, Marie’s daughter, and Tom Sharp, Margaret’s youngest son. The book features a foreword by Jonathan Vance that puts the letters in historical context.