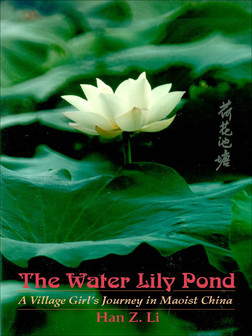 This evocative narrative draws us into the inner life of a young Chinese peasant girl, May-ping, and her first glimmerings of youthful love and idealism under the Maoist regime in China. As she grows into a mature woman, she becomes increasingly aware of the strife around her. An intelligent girl born into a Poor-Class family in a small village in rural China, she is, because of the Maoist policy towards such families, able to pursue her dream of going to university. To her surprise, urban snobbery and “student thought-spying” at university make it essential for her to hide her real thoughts. Such self-protection becomes especially necessary once her idealistic boyfriend Dan — a secret boyfriend because young people were forbidden to be romantically involved — is sent to a labour camp for his outspoken ways. In her village, she learns that everything has value except the lives of girls and women. One of her childhood friends, a landowner’s daughter who because of her family’s Landlord Class, is not allowed to go to university drowns herself when forced to face an arranged marriage. Hua-Hua, a shy and gentle neighbour, hangs herself after her husband beats her brutally for not bearing him a son. May-ping manages to survive the Cultural Revolution as a member of the Communist party who feels outside the system and keeps her inner self intact. Her story reveals how political change during the Maoist regime left its mark on ordinary people. Employing stories within stories, the narrator carries the reader to a mythological realm to images of the resilient water lilies and the nurturing lily pond.