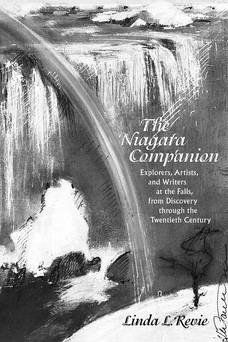 The Niagara Companion : Explorers, Artists, and Writers at the Falls, from Discovery through the Twentieth Century

What is it about Niagara Falls that fascinates people? What draws them to it? Is it love, obsession, or fear? In The Niagara Companion, Linda Revie searches for an answer to these questions by examining the paintings and writings about the Falls from the late seventeenth century, when the first Europeans discovered Niagara, to the early twentieth century. Linda Revie’s study considers how three centuries of representations are shaped by the earliest encounters with the waterfall and notes shifts in the construction of landscape features and in human figures, both Native and European, in the long history of fine art depictions. Travel narratives, both literary and scientific, also come under her scrutiny, and reveal how these chronicles were influenced by previous pictures coming out of Niagara, particularly some of the first from the seventeenth century. In all of these portraits and texts, she notes a common pattern of response from the observers — moving from anticipation, to disappointment, to a kind of recovery. But in the end, there is fear. Even long after Niagara had become a tourist mecca, it was often drawn as a primordial wilderness — a place where civilization vies with wildness, artifice with nature, fear with control, the natural with the mastered. Throughout this history of images and narratives, as humans struggle to control nature, the notion of wildness prevails. Those who want a deeper understanding of why Niagara Falls continues to fascinate us, even today, will find Linda Revie’s book an excellent companion.