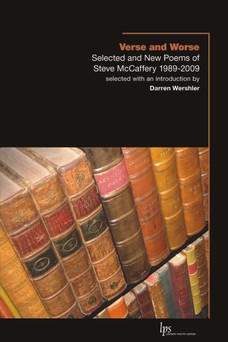 Verse and Worse: Selected and New Poems of Steve McCaffery 1989–2009 presents texts from the last two decades of work by Steve McCaffery, one of the most influential and innovative of contemporary poets. The volume focuses on selections from McCaffery’s major texts, including The Black Debt, Theory of Sediment, The Cheat of Words, and Slightly Left of Thinking, but also features a substantial number of previously ungathered poems. As playful as they are cerebral, McCaffery’s poems stage an incessant departure from conventional lyrical and narrative methods of making meaning. For those encountering McCaffery’s work for the first time as well as for those who have followed the twists and turns of his astonishingly heterogeneous poetic trajectory over the past four decades—this volume is essential reading.