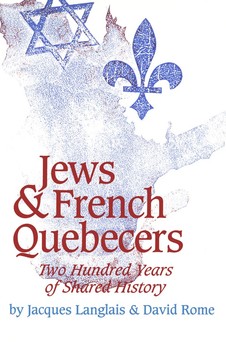 Jews and French Quebecers recounts a saga of intense interest for the whole of Canada, let alone societies elsewhere. This work, now translated into English, represents the viewpoints of two friends from differing cultural and religious traditions. One is a French Quebecer and a Christian; the other is Jewish and also calls Quebec his home. Both men are bilingual. Jacques Langlais and David Rome examine the merging — through alterations of close co-operation and socio-political clashes — of two Quebec ethno-cultural communities: one French, already rooted in the land of Quebec and its religio-cultural tradition; the other, Jewish, migrating from Europe through the last two centuries, equally rooted in its Jewish-Yiddish tradition. In Quebec both communities have learned to build and live together as well as to share their respective cultural heritages. This remarkable experience, two hundred years of intercultural co-vivance, in a world fraught with ethnic tensions serves as a model for both Canada and other countries.