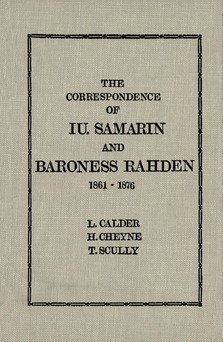 The Correspondence of Iu Samarin and Baroness Rahden : 1861-1876

Iuri Samarin and Baroness Rahden were intelligent and cultured people who moved easily in nineteenth-century Russian and European society and whose comments on leading personalities, religious, political, and social questions still have relevance for today. The Correspondence of Iu Samarin and Baroness Rahden introduces the reader to a side of Russian intellectual life that deserves more attention than it has generally received, if only because it opens the door to a broader view of Russian society. Iuri Samarin was one of the most prominent and effective Slavophils, exerting a powerful influence on the development of Russian society in his lifetime as a political reformer and publicist. His work deserves attention, and this correspondence reveals much about the quality of his learning, his personality and character, and his philosophy of politics and religion.