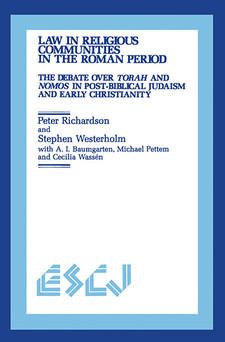 Law in Religious Communities in the Roman Period : The Debate over Torah and Nomos in Post-Biblical Judaism and Early Christianity

The role and function of law in religious communities in the Roman period—especially in Judaism—has been a key issue among scholars in recent years. This thought-provoking work is the first full-scale attempt to write a historical assessment of the scholarly debate concerning this question, focussing on two closely related religious communities, Judaism and Christianity. By juxtaposing the two religions, a clearer understanding of the developments with respect to torah and nomos in Judaism and early Christianity emerges. This insightful work, placing emphasis on the major figures and both the scholarly lines of development and the appropriate lines for future research, will set the debate in a clearer and more and succinct manner. It will serve as a critical point of reference for further discussion.