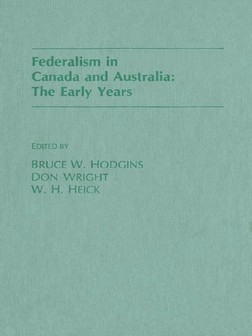 Federalism in Canada and Australia : The Early Years

This book is a comparison of the history and politics of two sister societies, comparing Canada with Australia, rather than, as is traditional, with the United Kingdom or the United States. It is representative of a particular interest in promoting more contact and exchange among Canadian and Australian scholars who were investigating various features of the two societies. Because some of them were individually involved in aspects of federalist studies, an examination of the early evolution of federalism in what once were the two sister dominions seemed quite an appropriate area in which to begin comparisons. The book discusses Canadian federalism from about 1864 to 1880 and Australian federalism from about 1897 to 1914. It examines the background and changes wrought on early Canadian federalism and early Australian federalism.