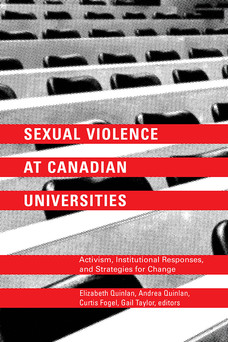 At least one in four women attending college or university will be sexually assaulted by the time they graduate. Beyond this staggering statistic, recent media coverage of “rape chants” at Saint Mary’s University, misogynistic Facebook posts from Dalhousie University’s dental school, and high-profile incidents of sexual violence at other Canadian universities point to a widespread culture of rape on university campuses and reveal universities’ failure to address sexual violence. As university administrations are called to task for their cover-ups and misguided responses, a national conversation has opened about the need to address this pressing social problem. This book takes up the topic of sexual violence on campus and explores its causes and consequences as well as strategies for its elimination. Drawing together original case studies, empirical research, and theoretical writing from scholars and community and campus activists, this interdisciplinary collection charts the costs of campus sexual violence on students and university communities, the efficacy of existing university sexual assault policies and institutional responses, and historical and contemporary forms of activism associated with campus sexual violence.