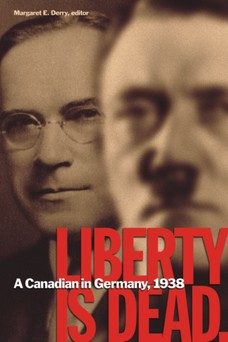 In the spring and summer of 1938, a third-generation German Canadian took an unforgettable road trip in Europe. Franklin Wellington Wegenast drove through Austria, Italy, France, Luxembourg, and Germany. He stopped to talk to people along the way and offered rides to those requesting them. He listened to what his passengers had to say about their lives, the conditions they lived under, and their views on what was happening in Europe. Wegenast heard Hitler speak in Innsbruck, and so witnessed first-hand Nazi power as Austria’s independence crumbled. In his journal he noted “the sheer animal force in the cries of the crowd,” and foresaw the “collision course” that was shaping up between the Germans who supported Hitler’s ideology and the rest of the world. Wegenast was unable to publish the journal he kept on his journey, and at the time of his death in 1942 it was in an unorganized state. It is published here for the first time alongside commentary that puts the entries in the contexts of Wegenast’s life experiences, the prevailing attitudes of the day, both in North America and Europe, and modern scholarship on Germany in the 1930s. The book includes correspondence Wegenast had with a young German for a few months after his return to Canada, correspondence that reveals even more clearly the intensity of his feelings and his fear for the future. Newly released government documents and diaries kept by Germans during the interwar period have meant a considerable outpouring in recent years of material on German sentiment in the 1930s. Wegenast’s diaries and letters corroborate modern assessments of German thinking and add insightful commentary, providing an outsider/insider view on the brewing conflict.