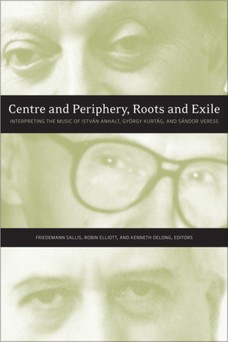 This book examines the impact place and displacement can have on the composition and interpretation of Western art music, using as its primary objects of study the work of István Anhalt (1919–2012) György Kurtág (1926–) and Sándor Veress (1907–92). Although all three composers are of Hungarian origin, their careers followed radically different paths. Whereas, Kurtág remained in Budapest for most of his career, Anhalt and Veress left: the former in 1946 and immigrated to Canada and the latter in 1948 and settled in Switzerland. All three composers have had an extraordinary impact in the cultural environments within which their work took place. In the first section, “Place and Displacement,” contributors examine what happens when composers and their music migrate in the culturally complex world of the late twentieth century. The past one hundred years produced record numbers of refugees, and this fact is now beginning to resonate in the study of music. As Anhalt himself forcefully asserts, however, not all composers who emigrate should be understood as exiles. The first chapters of this book explore some of the problems and questions surrounding this issue. Essays in the second section, “Perspectives on Reception, Analysis, and Interpretation,” look at how performing acts of interpretation on music implies bringing the time, place, and identity of the musician, the analyst, and the teacher to bear on the object of study. Like Kodály, Kurtág considers his work to be “naturally” embedded in Hungarian culture, but he is also a quintessentially European artist. Much of his production—he is one of the twentieth century’s most prolific composers of vocal music—involves the setting of Hungarian texts, but in the late 1970s his cultural horizons expanded to include texts in Russian, German, French, English, and ancient Greek. The book explores how musicologists’ divergent cultural perspectives impinge on the interpretation of this work. The final section, “The Presence of the Past and Memory in Contemporary Music,” examines the impact time and memory can have on notions of place and identity in music. All living art taps into the personal and collective past in one way or another. The final four chapters look at various aspects of this relationship.