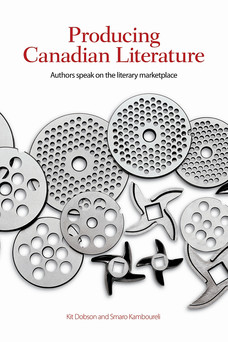 Producing Canadian Literature: Authors Speak on the Literary Marketplace brings to light the relationship between writers in Canada and the marketplace within which their work circulates. Through a series of conversations with both established and younger writers from across the country, Kit Dobson and Smaro Kamboureli investigate how writers perceive their relationship to the cultural economy—and what that economy means for their creative processes. The interviews in Producing Canadian Literature focus, in particular, on how writers interact with the cultural institutions and bodies that surround them. Conversations pursue the impacts of arts funding on writers; show how agents, editors, and publishers affect writers’ works; examine the process of actually selling a book, both in Canada and abroad; and contemplate what literary awards mean to writers. Dialogues with Christian Bök, George Elliott Clarke, Daniel Heath Justice, Larissa Lai, Stephen Henighan, Roy Miki, Erín Moure, Ashok Mathur, Lee Maracle, Jane Urquhart, and Aritha van Herk testify to the broad range of experience that writers in Canada have when it comes to the conditions in which their work is produced. Original in its desire to directly explore the specific circumstances in which writers work—and how those conditions affect their writing itself—Producing Canadian Literature will be of interest to scholars, students, aspiring writers, and readers who have followed these authors and want to know more about how their books come into being.