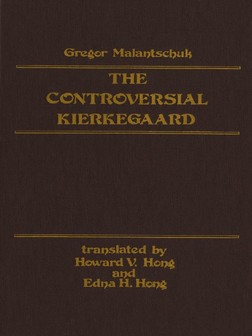 A widespread misapprehension of Søren Kierkegaard is that his concern for the individual and the individual's relation to the divine excluded any significant attention to social and political problems. In this volume Gregor Malantschuk, before his death one of the world's foremost Kierkegaard scholars, demonstrates the social dimension of Kierkegaard's thought – the relation between the individual and the state, the distinctive and complementary character of man and woman, his possible acquaintance with Marxist thought. The book shows Kierkegaard as an astute observer of the social and political situation of his time and underscores the differences between his presuppositions and those of the present day. The book is a translation of Den kontroversielle Kierkegaard together with two additional essays by Malantschuk.