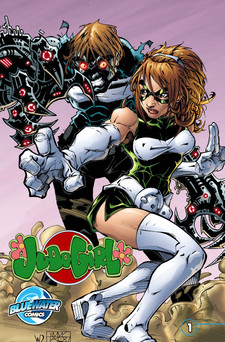 From the pages of The 10th Muse comes a new hero. Judo Girl is a woman on a mission: after having spent 40 years in suspended animation, she searches for her missing brother. But Captain Steel hasn't exactly spent the last four decades collecting rust. Indeed, his awful plans are about to solidify on a worldwide scale. On the flip side is a retro story set during the era of go-go boots and slot cars, revealing the secret origin of the original Steel Ray. Martial art meets pop art! Both the modern story and the retro story tie in together for one fantastic adventure!