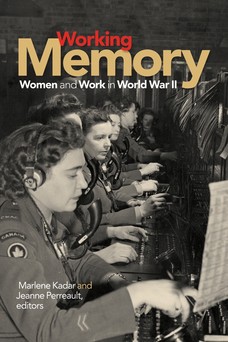 Working Memory: Women and Work in World War II speaks to the work women did during the war: the labour of survival, resistance, and collaboration, and the labour of recording, representing, and memorializing these wartime experiences. The contributors follow their subjects’ tracks and deepen our understanding of the experiences from the imprints left behind. These efforts are a part of the making of history, and when the process is as personal as many of our contributors’ research has been, it is also the working of memory. The implication here is that memory is intimate, and that the layering of narrative fragments that recovery involves brings us in touching distance to ourselves. These are not the stories of the brave little woman at home; they are stories of the woman who calculated the main chance and took up with the Nazi soldier, or who eagerly dropped the apron at the door and picked up a paintbrush, or who brazenly bargained for her life and her mother’s with the most feared of tyrants. These are stories of courage and sometimes of compromise— not the courage of bravado and hype and big guns, but rather the courage of hard choices and sacrifices that make sense of the life given, even when that life seems only madness. Working Memory brings scholarly attention to the roles of women in World War II that have been hidden, masked, undervalued, or forgotten.