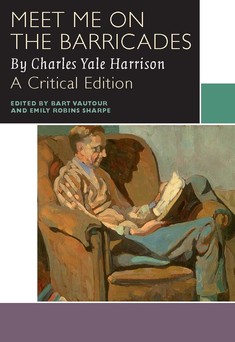 Meet Me on the Barricades

Meet Me on the Barricades is Harrison’s most experimental work. The novel includes a series of fantasy sequences that culminate in a scene heavily indebted to the Nighttown episode in James Joyce’s Ulysses (the novel was published a year before James Thurber’s better-known short story, “The Secret Life of Walter Mitty”). The novel is also Harrison’s only foray into satire—an especially unexpected turn given that the Spanish Civil War literary canon, and particularly works of literature written in the midst of the war, tend towards earnestness rather than irony. Harrison’s novel is thus a unique book, significant for its self-consciousness as a modernist novel and as a political document. Out of print since its single publication run in 1938, this critical edition recovers Harrison’s important commentary on the heated “culture wars” of the 1930s and the Spanish Civil War. With an original critical introduction and extensive textual and editorial notes, this edition draws on original archival research to situate the novel within the modernist and leftist North American canons. Meet Me on the Barricades is a densely allusive text that layers global politics, revolutionary theory, classical music, literary theory, world history, and anti-Stalinism, as well as emergent biological discourses about sex. It recounts a few days in the life of P. Herbert Simpson, a middle-aged, weak-hearted oboist with the New York Symphony Orchestra and leftist fellow traveller. Simpson is subject to wild hallucinations that are sometimes daydreams, sometimes drunken delirium, and on occasion intricate dreams while asleep. He imagines escaping his unrewarding marriage with a prudish, domineering wife through a passionate fantasy of a Russian girlfriend, and escaping his day job in the symphony to fight on the front lines of the Spanish Civil War.