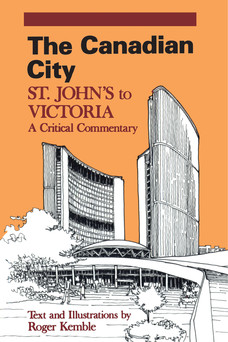 The Canadian City : St. John's to Victoria: A Critical Commentary

Architect and artist Roger Kemble has demonstrated his ideas of urban design with images from sixteen major Canadian cities—among others. He has walked, measured, and sketched their streets, squares and places, scanned their horizons, probed the relationships between structures, land and landscape with unprecedented energy. More significantly, he has reacted to the negative effect that all the busy business of urban development is having on our daily lives and he has had the courage to offer concrete remedial plans. If, as Kemble (quoting Ruskin), reminds us: 'Architecture is the mother of the arts', then time spent with his bold, imaginative, idiosyncratic view of the making (and unmaking) of cities—drawn with passionate hindsight and compassionate foresight—will be a moving and healing experience.Through the beckoning text of The Canadian City and its 144 illustrations, we will come to know the map of our own country and city as never before. The long shadow cast by this knowledge will make us more aware travellers abroad, too. Principles of city living and city building will accompany us everywhere, with an unsuspecting vividness. There is only a short step from Roger Kemble's studio to the world.