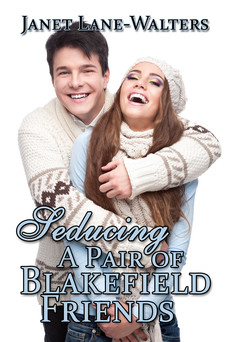 Seducing a Pair of Blakefield Friends

Lauren Grant’s first meeting with Tony Carlin happened four years ago at her sister’s wedding to his older brother. There’s been an attraction but a wary one. The handsome arrogant attorney had showed disdain. At that time Lauren had been a troubled teen with streaked hair and piercings. Now, she’s working toward her Master’s in OT and has no time for more than school and her infant nephew. The death of Jamie’s parents has left Tony and Lauren as joint guardians of the baby. In Seducing the Baker, Jules comes face to face with the first girl to turn him down. Grace Sutton is faced with a dilemma added to by the appearance of Jules in her Sweet and Spicy Cupcake bakery. Years ago she turned Jules down but she had a crush. His appearance erodes the vow she made years ago. Men had used her mother and led the woman into drugs and alcohol. Grace vowed to forego relationships with men until she could support herself. Though the bakery is making money, she doesn’t feel secure. When Jules arrives with a contract for a magazine feature, she is conflicted and attracted.