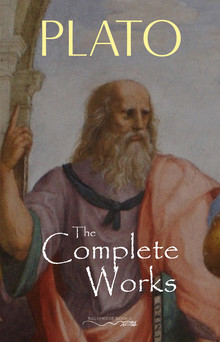 Plato was a philosopher in Ancient Greece. He was an essential figure in the development of philosophy, especially the Western tradition, and he founded the Academy in Athens, the first institution of higher learning in the Western world. Plato's dialogues have been used to teach a range of subjects, including philosophy, logic, ethics, rhetoric, religion and mathematics. His lasting themes include Platonic love, the theory of forms, the five regimes, innate knowledge, among others. His theory of forms launched a unique perspective on abstract objects, and led to a school of thought called Platonism. Along with his teacher Socrates and his most famous student, Aristotle, Plato laid the foundations of Western philosophy and science. Alfred North Whitehead once noted: "the safest general characterization of the European philosophical tradition is that it consists of a series of footnotes to Plato. This collection contains the following works by Plato: •Alcibiades I &amp; II •Apology •Charmides, or Temperance •Cratylus •Critias •Crito •Eryxias •Euthydemus •Euthyphro •Gorgias •Greater Hippias •Ion •Laches •Laws •Lesser Hippias •Lysis •Menexenus •Meno •Parmenides •Phaedo •Phaedrus •Philebus •Protagoras •Sophist •Statesman •Symposium •The Republic •Theaetetus •Theages •Timaeus