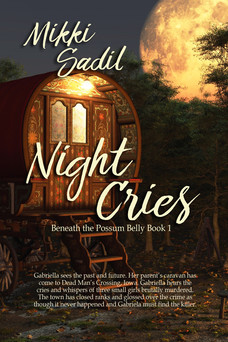 Beneath the Possum Belly: Night Cries

Cries in the night. Whispers against her cheek. Sixteen year old psychic, Gabriela Gaudet, is awakened night after night by crying and sobbing voices. Children’s voices. The traveling carnival that Gabriela’s French-Creole parents own has come to the small town of Dead Man’s Crossing, Iowa. Now the cries and whispers have become loud and pleading. Three small girls. Their brutal murder. An entire town closed ranks and glossed over this terrible crime as though it never happened five years before. It’s up to Gabriela to find the killer, and put the children’s souls to rest. Remi, a handsome young man who appears out of thin air, and disappears just as fast, meets Gabriela and become her partner in seeking justice. But there are strong forces in the town that want her gone. Just as strong are the forces that want her to stay and finish her mission. Then, there are the six gargoyles in the lobby of the high school who apparently come to life after dark, and the six women in the high school office who look perfectly normal…if you don’t count the tall, cone-shaped and brightly colored witch’s hat each of them wears. “Accidents” harass the carnival. Danger stalks Gabriela with every step she takes. A web of evil surrounds the town, and threatens to draw her into its sticky strands. Will her powers be strong enough to fight off this malevolence, or will the town win again? The Possum Belly waits.