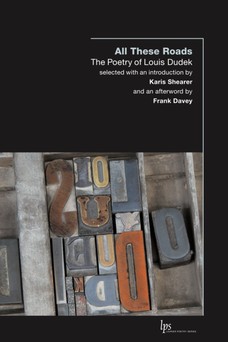 All These Roads : The Poetry of Louis Dudek

A passionate believer in the power of art—and especially poetry—to influence and critique contemporary culture, Louis Dudek devoted much of his life to shaping the Canadian literary scene through his meditative and experimental poems as well as his work in publishing and teaching. All These Roads: The Poetry of Louis Dudek brings together thirty-five of Dudek’s poems written over the course of his sixty-year career. Much of Dudek’s poetry is about the practice of art, with comment on the way the craft of poetry is mediated by such factors as university classes, public readings, reviews, commercial presses, and academic conferences. The poems in this selection—witty satires, short lyrics, and long sequences—reflect self-consciously on the relationship between art and life and will draw readers into the dramatic mid-century literary and cultural debates in which Dudek was an important participant. Karis Shearer’s introduction provides an overview of Dudek’s prolific career as poet, professor, editor, publisher, and critic, and considers the ways in which Dudek’s functional poems help, both formally and thematically, to carry out the tasks associated with those roles. Comparing Dudek’s reception to that of NourbeSe Philip, Marilyn Dumont, and Roy Miki, Frank Davey’s afterword locates Dudek in a pre-1980s version of multiculturalism that is more complex than many critics would have it. According to Davey, Dudek broadened the limits on the possible range and type of poetry for subsequent generations of Canadian writers.