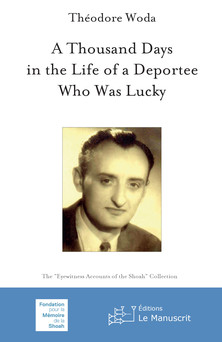 Holocaust survivors often say that the circumstances in which they defied death were a matter of sheer luck. They also mention the random, arbitrary nature of the Nazi concentration camp system. Theodore Woda puts luck at the heart of his story, showing that, although the Third Reich was intent on destroying all the Jews of Europe, gas chambers or a slow death by starvation and/or mistreatment did not always lie at the end of the road. It cannot really be said that luck was on Theodore’s side when the Gestapo arrested him during a spot check for the sole crime of being Jewish and deported him from the Drancy camp on transport 33. His “luck”, then, was relative. It came into play when the train taking him to the Auschwitz extermination camp stopped at the railway station in Opole, where he and some fellow deportees were selected for slave labor. But during the 32 months he spent in three slave labor and two concentration camps in Silesia, Theodore’s “luck” did not keep him safe from hunger, beatings, unhygienic conditions and abuse. As he relates in plain, matter-of-fact words, he was “lucky” to work in workshops, know German and possess the resourcefulness to live by his wits. Under those circumstances, he managed not only to find food to supplement his insufficient diet, but to correspond with his family and even receive parcels sent to him under the names of men in the STO (the French acronym for Service de travail obligatoire, or Compulsory Labor Service). In sum, he was “lucky” to return alive from the maelstrom that claimed the lives of his mother, two of his brothers, one of his sisters, his uncle and his aunt. His testimonial has been unpublished until now.