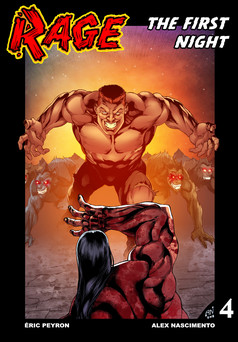 Rage; The legendary Bane of Demons - along with High Mage Nicodemus, Princess Ariane, and Tuk have all been sent on a new quest by Kothas, King of Arthkan.  Having learned that Tuk is in possession of a powerful lucky charm that was once his - the Bracelet of Chance - and magically unable to take it by force, the sorcerer Erasmus has been trying to no avail to convince the little vagrant to give it to him. Following Rage and his companions closely, Erasmus and the werewolf Serk have devised a plan to isolate Tuk. After ordering Serk to change a group of soldiers into werewolves, Erasmus then boosted their powers and sicced the creatures on Rage, believing Tuk would be able to survive their onslaught by sheer luck. Erasmus would then have a better chance of persuading Tuk to give him the Bracelet. But an ominous thought is crawling inside the sorcerer's mind: isn't all this a little too much, even for Tuk? What if the bracelet gets lost in the slaughter? Poisoned by doubt and dread, Erasmus is running toward the camp with Serk, to help Tuk escape.